I’ve found my seat at the Bloggers Table, ready for the beginning of the keynote in just 12 minutes. I’ll be doing my best keeping up with all of the exciting news about to be spilled out. 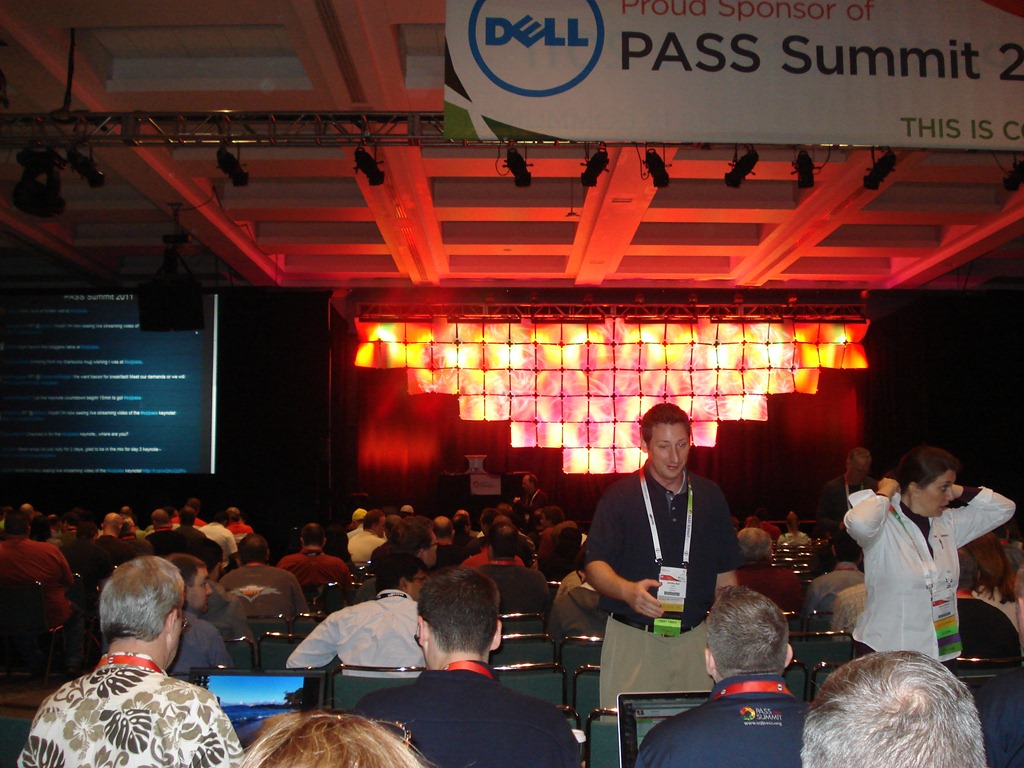 [8:20] Light dimming down, PASS love testimonials blasting off on the 4 giant screens next to the stage.

[8:23] If you’re not here, remember you can tune in to the live streaming feed here: http://www.sqlpass.org/summit/2011/Live/LiveStreaming.aspx

[8:39] SQL Server MVP Deep Dives vol II available. Profits going to charity. Get it! Book signing will be happening at the summit.

[8:44] “Some database vendors just decided to get into the cloud last week. You know who I’m talking about right?”

[8:46] Over 4,000 registered attendees at the PASS Summit. Largest Summit conference ever!

[8:48] Cloud is not either or, it’s a hybrid world. Some will be in cloud, some will be in your own datacenter. We want to provide choices.

[8:49] Want to offer all the cloud capabilities, SSAS cloud version hinted at.

[8:50] Denali – one of the most significant releases in our history.

[8:55] “Believe in the platform as more than just relational data.”

[8:59] Microsoft supporting the Apache Hadoop project. Make sure it’ll run great on Windows. Is this the belief in “more than just relational data”?

[9:00] Connect Hadoop and Microsoft and offer them together. Microsoft submitting to the Hadoop project to ensure it runs great. “We’re going to connect the dots in our environment.”

[9:02] Eric looks like he’s about to fall asleep. Should’ve had a Red Bull before going on stage before 4,000 people.

[9:04] “Hadoop could be storing half of the worlds data in five years.”

[9:14] Always nice with a demo, but really, noone could read console (please use Zoomit next time, don’t use white on black). Rest was just pie charts and Excel with a story of where the data came from.

[9:19] Ignoring content, it’s obvious that the Metro UI team had a say in the slide & UI design of slide decks and products being demoed. Beautiful.

[9:22] Oh, Excel just reappeared. What is this, PAE – Professional Association of Excel?

[9:23] Talking about Excel & pie charts. Noone can see the screen, even in front row. Resolution way too high, no usage of Zoomit. You’d think they’d get presenting 101 right for a keynote demo.

[9:29] Not much to update. Demoing at unwatchable resoluition, talking Excel, BI, PowerPivot. It looks cool, but I just don’t believe in production drag’n’drop development/BI.

[9:32] If you ever wondered what a golf clap sounded like, make sure to watch the PASS Summit live stream recordings later today.

[9:36] Amir Netz welcomed on stage. This should be better, hoping for some tech demos. Amir is an excellent demoer, based on previous keynotes.

[9:50] Amir showing lots of graphs, doing data mining on movies, actors, etc. Most of todays demos seem to be in building on top of what we saw last year. Hadoop announcement was awesome, rest just seems like slow evolution.

[9:56] Keynote about to end. Lots and lots of Excel, BI and graphs. I saw two interesting announcements:

[10:00] Now on to the coffee to wake up from the keynote. Looking forward to live blogging the day 2 keynote tomorrow – it can only be better than what we just saw today.