There are many numeral systems, the most common ones in computer science being binary (base 2), decimal (base 10) and hexadecimal (base 16). All numbers can be expressed in either system and you may now and then need to convert between them.

If you’ve got an internet connection, the quickest and simplest way is often to just use Google. We can convert the above number using “in X” queries:

You can also open Windows Calculator, switch to the programmer mode and type in the decimal value (or the hex/binary value): 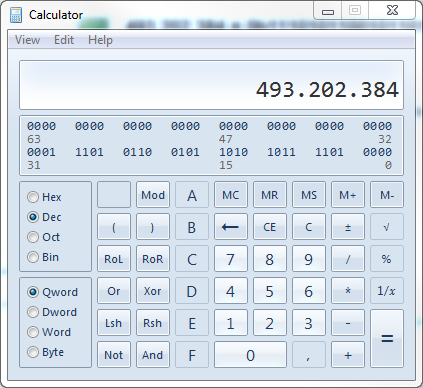 And from then on we can just switch the numerical system selector to the left: 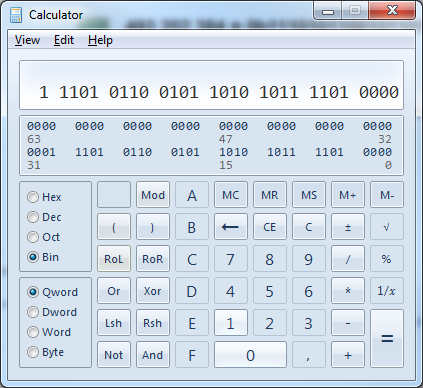 Converting between decimal & hex in T-SQL

Sometimes however, it’s just a tad easier if we could do it directly from a T-SQL query. Converting between decimal and hexadecimal is straightforward and can be done using just built in functions: 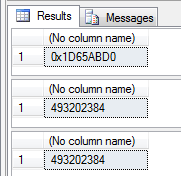 Converting to/from binary is a bit more tricky though, as there are no built in functions for formatting a decimal number as a binary string, nor converting the latter to the first.

The following function takes in a binary string and returns a bigint with the decimal value:

The function looks at each char in the input string (starting from behind), adding POWER(2, @Cnt) to the result if the bit is set – with special handling of the first (that is, from behind) character since POWER(2, 0) is 1 while we need it to be 0.

The following function takes a bigint as input and returns a varchar with the binary representation, using the short division by two with remainder algorithm:

A simple test to ensure correct conversions would be to convert from A to B and back to A again, using both of the above functions. Thus whatever we give as input should be the output as well:

Et voilá! Once we have the functions, they can easily be used in a normal query: 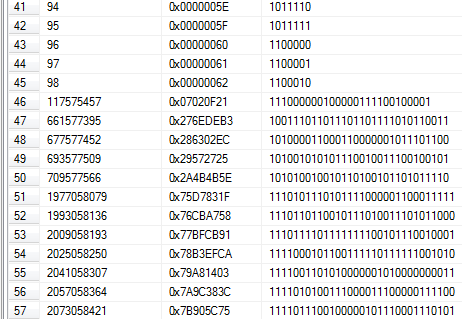