SQL Server stores all of it’s data in what is basically a large array of “pages”. Each page is exactly 8kb and can contain various kinds of data, depending on the page type. In this entry we’ll explore how to decipher a data page.

As mentioned, all data in SQL Server is stored in pages, this includes data, index data and various other page types (GAM/SGAM/IAM/PFS etc) to support the operations of SQL Server. Each page type has a unique page content and will thus require separate analysis to understand their content. In this entry I’ll concentrate on a normal data page, that is, the pages that contain the data of either heap tables or clustered indexes.

A page has a basic structure consisting of a header, the actual page content and finally an array noting the locations of the individual rows in the content section. 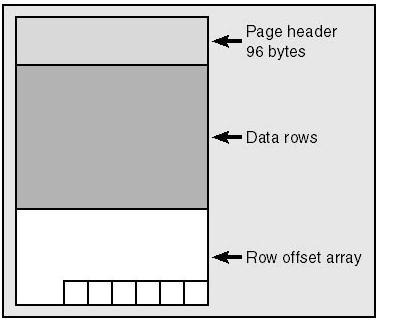 First of all, we need to create a new empty database for this to work:

To make it easier to reset & redo the examples, you should start a new transaction by running “BEGIN TRAN” as the first command (I’m assuming you’re running these queries in SSMS). When you want to reset / start over, just run “ROLLBACK” and nothing will be saved.

First we will look at the structure of data pages for a heap table. We’ll create a simple table containing only a single int (identity) field:

If you do a SELECT on the tmp table at this point, you should get two rows with values 1-2 in the ID column. At this point we want to retrieve a list of the pages used to store the contents of the tmp table. We can do this by using the undocumented DBCC IND command:

The only two important columns at this point are the PagePID, IAMPID and PageType columns. PagePID is the unique (within this database file) page ID for a specific page. IAMPID defines a parent/child relationship between pages. PageType defines the type of page that we’re looking at. The most common page types you’ll run into are:

At this point we’re interested in the root IAM (page type = 10) page with page ID 119. This is the root page of our heap table index. This is the page that currently tracks all of the data pages belonging to the tmp table. Currently there’s only one IAM page, but if necessary, there can be multiple nested IAM pages to support more data pages than can be referenced on a single IAM page.

Before we can retrieve the contents of the page, we have to turn on a specific trace flag, otherwise we won’t see any results of the following command, as they’re sent only to the error log by default:

After the trace flag has been turned on, we’re ready to run the undocumented DBCC PAGE command. The DBCC PAGE command takes four parameters, the first one being the database name. The second is the file number in the database - this will be 1 since there’s only a single file per database by default. The third parameter is the page ID we want to analyze - notice that this varies and will most likely be different in your situation. The final parameter defines the level of detail (0-3) to be included in the output. The most common levels are 0 and 1, 0 outputting only the header values while 1 also includes the actual row data.

The result should resemble the following:

I’ll elegantly jump over the buffer & header parts as they’re begging for posts on their own, and I can’t realistically show them the respect they need in this post. Instead we’ll concentrate on the DATA & OFFSET TABLE parts.

Let’s start out from the bottom up and look at the OFFSET TABLE:

Notice that it should be read from the bottom up as well, row 0 being the first, 1 being the second. The row offset table is basically an integer array pointing out the to locations in the 8KB page of the individual row locations. As we have two rows in our table, and they both fit on this page, there’s two entries in the offset table. The first row starts at byte index 96 - the first byte after the 96 byte header. The second row starts at index 107, 11 bytes after the first row. Let’s take a look at the first row (the rows are identical):

The first row has slot 0, it’s offset is 0x60 (96) and we already know the length is 11 bytes, from the offset table. Let’s take a look at the rows actual content, to understand what is stored.

Let’s do a rollback and create a new table with a slightly changed schema and values:

We still have a single ID column, but this time it’s not an identity column, and we’re manually inserting the value “1” into the column. Thus both rows will have the same value. If we runn DBCC IND to get the page id, and then DBCC PAGE on the data page, we’ll get the following two rows:

The first row is almost identical to the last. It’s still 11 bytes long and its status bits indicate there’s only a null bitmap. One thing has changed however.

If we take a look at the second row, we’ll see that the length is 19 bytes, an extra 8 bytes. Furthermore, the status byte has changed its value to 0x30, indicating there’s both a null bitmap, as well as a “variable columns” section. Take a look at the row data (note that I’ve concatenated the two lines to make it more readable):

To elaborate on the variable length columns, consider the following table and values:

Let’s look at the row contents:

As a final example, let’s look at what happens when we have null values in our columns.

As a proof of SQL Server only adding fields when needed, there are no variable_columns attributes in the fourth row, since both columns are null and we therefore do not need to keep track of the length of the columns.