Determining the Uniquifier Column Ordinal for Clustered and Nonclustered Indexes

Using an empty database I create the following schema and insert two rows. Note that the clustered index is created on the (ID, Name) columns and will thus have uniquifiers inserted since my rows aren’t unique. Also note that I’m intentionally creating a schema that will cause all three allocation unit types to be created – IN_ROW_DATA by default, LOB_DATA for the text column and finally ROW_OVERFLOW_DATA due to the overflowing varchar filler columns. This won’t serve any practical purpose besides being eye candy when looking at the data :)

Verifying the presence of uniquifiers in the clustered index

Running a quick DBCC IND on the Test table’s clustered index in the database (I’ve named mine ‘Y’ – I’m lazy), demonstrates the allocation of three allocation unit types as well as their tracking IAM pages.

What we’re interested in are the two data pages of the clustered index – pages (1:89) and (1:114) in my case. Dumping the contents using dump style 3 shows that both have uniquifiers – one with a NULL value (interpreted as zero) and the other with a value of 1.

Notice how both are represented as slot 0 – this is because they stem from different pages, I’ve just cut out everything but the uniquifier column interpretation of the DBCC PAGE results. Also note how the first record doesn’t have any physical uniquifier value, while the second one uses 4 bytes. Finally make note that the uniquifier columns both reside at column ordinal 0.

Comparing the uniquifiers in the nonclustered index

Now we’ll run DBCC IND to find the single index page for the nonclustered index – page (1:93) in my case (the uniquifier will only be present in the leaf level index pages – which is all we’ve got in this case).

Dumping the contents of an index page using style 3 works differently for index pages – it returns a table resultset. It does confirm the presence of the uniquifier as well as our clustered index key columns (ID, Name) though:

Dumping in style 1 reveals the byte contents of the two rows, which is exactly what we need to locate the uniquifier:

Locating the uniquifier in a clustered index

Thankfully there’s a plethora of DMVs to look in, it’s just a matter of finding the right ones. Let’s start out by querying sys.objects to get the object id of our table:

Armed with the object id, we can find the default partitions for our clustered and nonclustered indexes:

Now would you take a look at that marvelous is_uniquifier column (we’ll ignore the alternative spelling for now). Using this output we can see that the first row is the uniquifier – being the third part of our clustered key (key_ordinal = 3). The leaf_offset column specifies the physical order in the record, fixed length columns being positive and variable length columns being negative. This confirms what we saw earlier, that the uniquifier is the first variable length column stored, with the remaining columns coming in at leaf offset –2, –3, –4 and –5.

Locating the uniquifier in a nonclustered index

Well that was easy, let’s just repeat that using the partition id of our nonclustered index (index_id = 2):

And that’s it, we now have the uniquifier column offset in the variable length part of our nonclustered index record!

As I can’t find any info guaranteeing that the uniquifier is the only integer stored in the variable length part of a record, I came up with a secondary way of finding the uniquifier column offset. This method is way more cumbersome though and I won’t go into complete details. We’ll start out by retrieving all columns in the nonclustered index that are not explicitly part of the nonclustered index itself (by removing all rows present in sys.index_columns for the index):

Now we can perform the same query for the clustered index, though this time only filtering away those that are not part of the key itself (that is, key_ordinal > 0):

The hardcore approach – using base tables

All those DMV’s certainly are nifty, but I just can’t help but feel I’m cheating. Let’s try and redo the optimistic (uniquifier being the only variable length integer) approach without using DMVs. Start out by connecting to your database using the dedicated administrator connection, this will allow you to query the base tables: 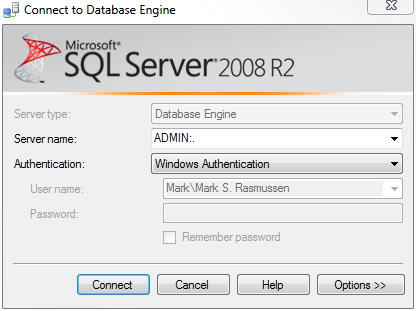 We’ll start out by querying sys.sysschobjs, which is basically the underlying table for sys.objects:

Now we’ll query sys.sysrowsets, which is basically the underlying table for sys.partitions. In the base tables, idmajor is the column name we commonly know as object_id and idminor is what we’d usually know as index_id:

Checking out the row with idminor = 2, we’ve now got the rowsetid (partition id) of our nonclustered index. Now we just need to find the columns for the index – and that’s just what sys.sysrscols is for, the base table behind sys.system_internals_partition_columns:

The following query helps to show exactly what we’re doing to extract the leaf_offset value from the offset column value:

The HexValue shows the offset column value represented in hex – no magic yet. After applying the 0xFFFF bitmask (0b1111111111111111 in binary), only the first 16 bits / 2 (starting from the right since we’re little endian) bytes will keep their value. Converting to binary(2) simply discards the last two bytes (the 0x0000 part).