When users need to upload files I often use the Flash based SWFUpload component. It allows for multiple file selection and progress display during upload. Handling the uploaded files on the .NET side is rather easy:

One of the arguments for using Flash for web designs is that it’ll look the same in all browsers. While that is literally true, there are a number of functionality differences when it comes to Flash and cross browser support.

There’s a bug in all current Flash players that causes the Flash player to send persistent cookies from Internet Explorer, no matter what browser you’re currently using. That is, if you’ve visited a given website in IE previously and you’re nor visiting it in Chrome/Firefox - yup, your IE cookies will be sent to the website instead of the Firefox/Chrome cookies! There’s a good description and discussion at the SWFUpload site.

Luckily there’s a workaround for this. Basically we’ll need to tell our upload SWF the current SessionID as well as the contents of the forms authentication ticket cookie:

Now we need to modify our SWFUpload code so it sends the SessionID and ticket values in the query string to the upload file, so instead of calling:

Now that we have the SessionID and ticket value we can manually restore those cookies in Global.asax (or an HttpModule, doesn’t matter). We’ll be doing the fix in Application_BeginRequest as this allows us to fix the cookies before ASP.NET will perform its validation and thereby notice the missing session and forms authentication cookies.

Note that there is a security implication in doing this as it allows for session hijacking if you’re able to fake another users SessionID and forms authentication ticket! Thus, make sure you handle this or at least know the risks in not doing so.

OK, so that fixes the SWFUpload issue. This ran perfectly for some time. However, once i placed an IIS7 Application Request Routing based load balancer in front of the machine serving the upload applications, the issue from before reappeared, even though my original cookie handling code was still in place.

The reason for the resurrection of the cookie bug was to be found in the way ARR maintains client affinity: 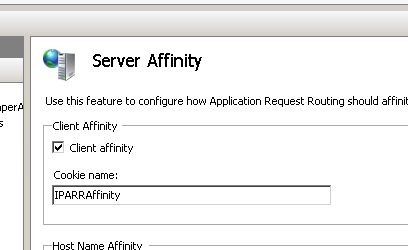 IIS ARR will set a cookie on the client that basically contains a hash of the content server to which the client is bound. This is a very simple and neat client affinity solution as there’s no shared state on the IIS ARR machine itself. Thus, it’s easy to combine a number of IIS ARR servers using NLB and let IIS ARR handle client affinity and thus simplify the NLB setup.

However, since the client affinity is handled by a cookie - that cookie was now suffering from the same bug as before. Basicaly the IIS ARR load balancer thought it received a completely new client request and thus assigned the request to a random content server, giving a 1/[num_machines] chance of succeeding in case it randomly hit the correct content server.

The solution is similar, though there is one major difference. The previous problem occurred on the actual content machines because those were missing a cookie value, in this case it’s the load balancer itself. Thus, deploying a fix on the content servers won’t do any good.

We’ll create a new HttpModule that performs the fix in Application_BeginRequest - which occurs before IIS ARR assigns the request to a content server. To ensure this fix does not in any way affect normal requests in case something goes wrong, exceptions are being silently ignored. This is generally a bad practice, but in this case I really do not want to affect the load balancer as that’ll put down the website for all users if an error occurs. Note that while the handling is very similar to the previous bit of code, this time we’re modifying the actual Cookie header directly. If we don’t do this, IIS ARR won’t pick up the overwritten cookie values and thus still send the user to a random content server.

Once you’ve compiled the HttpModule we need to install it on the IIS ARR machine. On a default installation of IIS ARR you’ll have your rewrite rules as global rules at the IIS-level. However, if you install the HttpModule at the IIS level you’ll get the following exception on all requests:

The virtual path ‘null’ maps to another application, which is not allowed root

Make sure there’s a bin folder in the default website root and place your HttpModule in there. Then setup your web.config like so:

This adds our HttpModule so it’ll run for all requests - fixing any missing ARR client affinity cookies. Note that your rewrite rules will likely differ from mine.