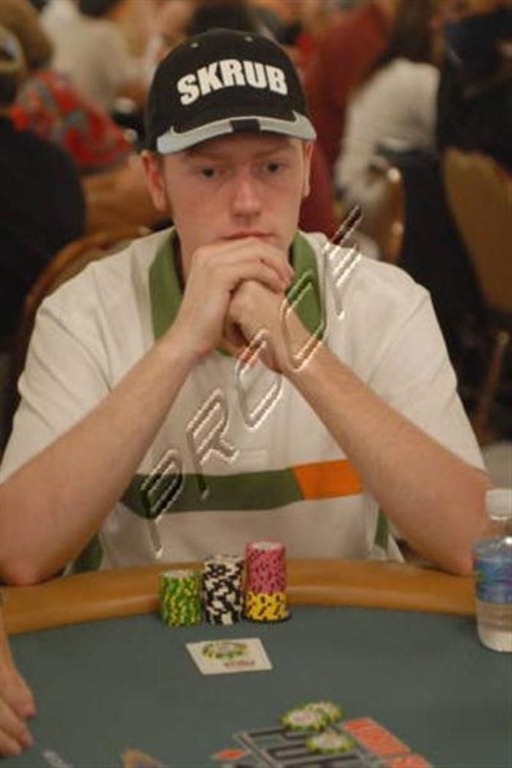 I guess it was a bad “decision” to only sleep 5 hours that night. I woke up at around 6 AM and couldn’t sleep any more. Not because I was overly nervous, though I guess the excitement might’ve played in unconsciously.

I got at my table at about 11:50 AM, pretty unknown table, no one I recognized, I suppose that’s good. I quickly took the lead at our table, I was clearly the one playing the most aggressive game. I raised a lot of drawing hands, TJ in position, 67s and so forth. I took down a lot of minor pots, including a sizeable 3k pot towards a 2+2’er sitting to my left (Durron597).

At one point we got a new player to the table, a real American original. He was constantly laughing in a dumb way, acting kind of retarded. He’d painted his fingernails white with royal flush symbols on each fingernail on both hands, yuck! At one point Norman Chad came over to me asking why I’d misspelled “Scrub” on my cap (I had a cap with the text “SKRUB” on it), one of the production managers had seen it and wondered what the story was. He asked if it was because I was one of those dumb internet qualifiers (in a jokingly way). Of course I answered, “Yeah, I AM one of those dumb internet qualifiers, though that isn’t the reason for the misspelling”. And then i give him the story of it being a Danish poker slang word for having luck / a good run of cards. The original went totally nuts when Norm came over talking to me, he was totally excited that one of the known ESPN commentators was at our table, so he made him aware of his fingernail painting, obviously very proud of it. Before long he’d convinced Norm to get the ESPN TV crew over to film it. While this was going all, I, together with my end of the table, were laughing our buts off.

After the first break I got absolutely no hands. I tried squeezing the pot sometimes but it seemed like the table had picked up on my style, and people weren’t playing nearly as scared as they began with, so all in all I had to slow down a touch. After about 6 hours or so from the start I was moved to table 128, having about 15k in chips. This table was a catastrophe for me position wise. On my direct right were Norm MacDonald, and two spots to my left were Mark Vos.

Norm had around 45k in chips, and Mark had around 35-40k also, they were without doubt the two chipleaders of the tournament, and I was sitting right in between, great!

I still didn’t pick up any hands, so I was just sitting tight. I tried squeezing a couple of times as well as bluffing it down on the flop, but the players at this table were far better players than on my first table, so it was a lot more difficult.

After about 30 minutes came a crazy hand. Blinds are about 50/100. Norm raises it preflop, Mark is the sole caller. The flop comes 9QJ. Norm bets. Mark raises. Norm thinks for a bit and then pushes all in. The all in push from Norm was a major overbet. Mark thinks for about a minute before he calls and tables QJ, beating Norms black aces. This was a major call for Mark, top two is a great hand, but 9QJ is a very dangerous flop, and Norm could easily have had a set, even KT was possible. No help for Norm and he’s almost out, Mark doubling up to an incredible chiplead. Norm is steaming and he plays a couple of terrible hands and ends up busting with KK towards an Ax hand catching an ace.

Luckily Mark was playing very tight passive after gaining the massive chip lead, I feared he’d be raising me out of most pots, luckily he didn’t. A new guy joined our table in Norms place, Flaminio from Italy. Very cool dude, got a good chat with him and he rooted for me when I was in tight spots. Chatting it up with players during the poker play is one of the greatest moments when playing poker. Although we’re battling it out against each other, you make some great friends.

The rest of my time at table 128 wasn’t really that spectacular, I didn’t get any great hands (my best hand all day was QQ), so nothing special really happened. At one point I had around 17k, I raised it preflop with A9o in MP, one guy called from the button. Flop comes three rags, 256 or something like that. I bet out around half pot. He comes over the top with a sizeable bet. I can’t really figure out what hand he should have that would’ve hit that flop. A set wouldn’t raise, on overpair would’ve raised me preflop. I put him on TJ-AK, some kind of overcard combination. I come over the top. He gets into the tank, thinking for a long time before he pushes his last chips in. I instamuck while puking into my water bottle. After this i had around 7k chips left.

I worked my way up to around 11k in chips before i got moved to my last table of the day at around 12 AM. This new table was a lot better for me. The players could clearly play poker, but they were so easy to read, and they were playing very scared. I picked up a lot of pots by simply playing the players. I received no cards at all during these final four hours, but i really ruled the table. When we had about 30 minutes left it got even better, everybody were playing soooo scared since they wouldn’t want to bust 30 minutes before we ended the day.

At one time i raised with QJ in LP (i had around 17k). A guy in the SB looked at me while thinking for some time. He sighed, really letting me know that he didn’t like the situation. Finally he said “oh what the heck” and shoved in his chips. I instamucked. He was so clearly acting, and his hand was shaking like a bunny having sex, it was so obvious he had a great hand. He tabled AA while looking a bit sad that he didn’t get my call. He asked me if there was any amount I would’ve called. “Nope, you shake too much”. Clearly he was not aware at all that he was shaking, and even less of it being a tell. Normally I wouldn’t notify a player of me picking up their tells, but we had 20 minutes left of the day and all odds are against me ever playing with him again. This also enabled me to constantly hit his blind and push him off hands as he was clearly scared of me.

The day ended with me having 18.425 chips, about 2/3rds of the average of about 27k. I am extremely satisfied with my play during the 1st day of the main event. This was without doubt the best poker I had ever played! I got no cards all day. I had no real hands that made my day, most of it was simply me playing the people instead of the cards. What surprised me the most was the fatigue such an event imposes upon you. I mean, how hard can it be to play cards for 16 straight hours? Pretty god damn hard! You have to be constantly concentrated for 16 hours straight, follow the action, remember all action and everything. From about 12 AM everybody were yawning. I was so ready to sleep when we were done at about 4 AM.