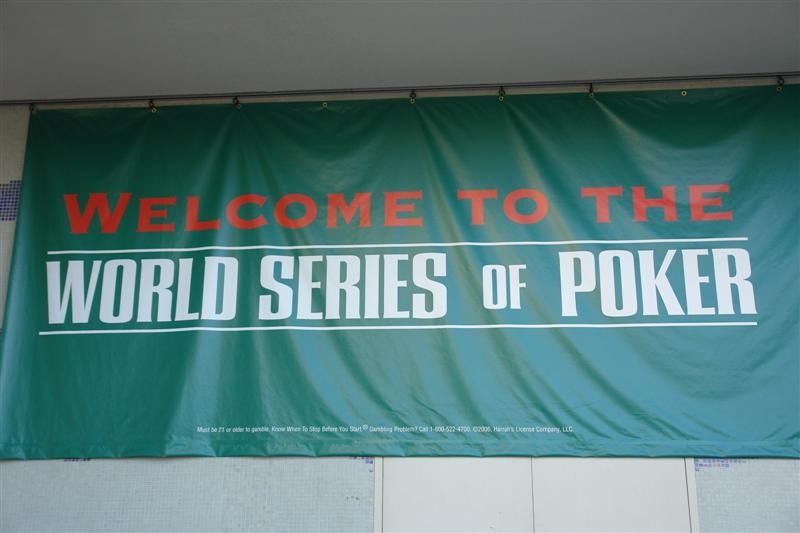 I also got an application made for my ITIN number, just in case I make a major cash in one of the tournaments, it would be a serious bad beat if I were forced to leave behind 30% of my winnings due to US tax laws. 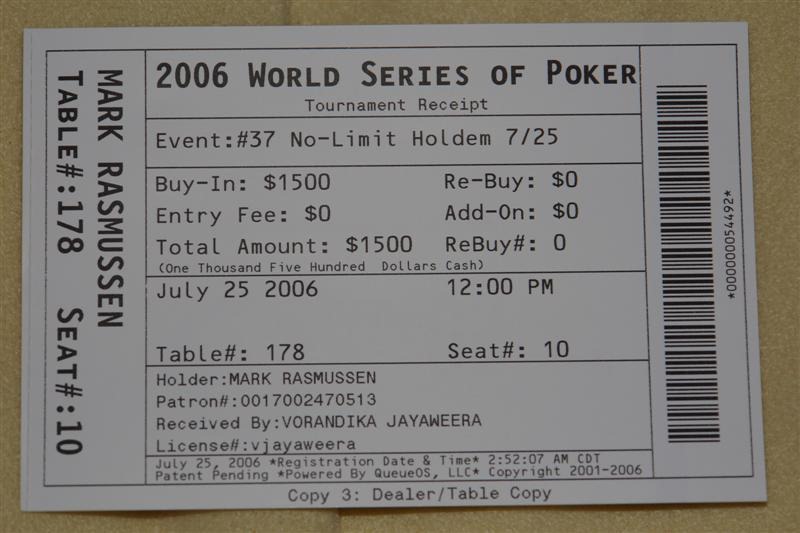 I arrive at a semi-good table. There’s about four players that I quickly recognize as being good players, whereof one of them has a highly tuned luckbox. The luckbox quickly becomes the chipleader at the table, bullying others around. There’s no doubt that he was a good player, but seriously, he just hit his hands. There was also a noshow at my table that had yet to show up when I busted after about three and a half hours, he had around t300 left (starting stack = 1500). I guess he was a better player than me, he must’ve read Harrington, he played kinda tight.

The first guy went out after about 10 minutes in a sick sick hand. Two limpers (the luckbox in the BB) see a flop of 779r, they both get all in. The first limper shows 99 for the flopped full house, too bad that our luckbox just flopped quads with his 77! That is without doubt the sickest beat i’ve seen live, mind you that I haven’t played much live though.

The luckbox quick get’s irritated with me as i’m sitting a couple of spots before him, continuously stealing his blinds. It ends up in the inevitable blind battle where I raise with 44 (no spades). He calls. The flop comes QsJs8s. I try to make a CR/bluff, but unfortunately he pushes and I’m forced to fold, having about t1000 left.

After this battle I suddenly stop getting hands, i get absolutely nothing. And before i know it, blinds are at 100/200 and i’m sitting with like t600 left. It’s foleded to me in LMP. I look down and see a nice couple of ladies and i push it in. It’s folded around to the luckbox who again goes into the tank while giving me the smirky look. He calls about 400 chips more into the pot of about 900 and shows 75o. Great, I’m a good favorite with about 82%. Unfortunately the flop comes 725r, he flopped two pair. The turn brings another 5 which brings me down to a total of two outs, the last two queens. Unfortunately the river is a blank jack, and i’m eliminated from the tournament at around midways into the 100/200 level.

Also I just received a second confirmation email from Harrah’s for my main event entry, they’ve suddenly moved my starting day from 1B to 1A. It doesn’t matter much to me as i’m already in Vegas, but seriously, how can Harrah’s change ones starting day three days before the tournament starts? What if I’d already made plans? This is no $1000 event we’re talking about, this is the $10.000 WSOP Main Event. Once again Harrah’s shows it’s incompetence.