I’m a big fan of strongly typed database querying as well as returning strong typed results. Due to the nature of static languages, you’ll get compile time checking of all our tables and columns. You can easily rename columns as you can be sure all your (internal) references are accounted for.

Returning strongly typed lists of objects instead of DataReaders/DataTables / any other object based containers will also make it easier to transfer through data layers as you’re always certain of what’s available for you to read and what’s not.

But it comes at a cost. Performance.

I set out to test various different ways we could query our database and generate a strongly typed List with the results in it. I’m using the standard AdventureWorks 2005 database for my testing. For the actual profiling, I’ll be using my CodeProfiler class from a previous blogpost.

They both map to the same table, Production.Product. CompleteProduct covers all columns, Product just covers the ones I’m interested in.

Cons: Has to be written for each object model

Cons: Has to be written for each object model

Comment: I often use a getDT()’ish way of accessing my tables. It’s easier than using DataReaders as they’re disconnected, you can traverse them back and forth multiple times.

Pros: Works for all object models, easy to use

Pros: Could it be easier? Works for all object models

Comments: In the previous method I retrieved complete Product entities. This time I’m retrieving only some columns of the CompleteProduct entity, mapping them over into a new Product. I’ve included this to see if there’s any performance difference in comparison to loading complete entities.

Pros: Simple to use, works for all object models

Comments: This is an enhanced version of the previous method that I’ve made. Explaining the inner workings is outside the scope of this particular topic so I’ll have to explain it in my next post. For now, just imagine something very cool and sexy. UPDATE: you can read about the method here.

Pros: Works for all object models

Comments: I’ve never used SubSonic before, so I may have overlooked some obvious performance enhancements, thus, take my numbers with a grain of salt.

Comments: I’ve never used NHibernate before, so I may have overlooked some obvious performance enhancements, thus, take my numbers with a grain of salt.

Pros: Among the fastest, no matter the rowcount, works for all object models

Cons: Requires a bit more setting up and helper functionality to store the compiled queries

I profiled each of the test cases by returning 1, 10, 100, 1.000, 10.000 and 100.000 rows. The numbers are the total execution time of 50 iterations of each method. I’m on a quad core machine so I set the max parallelization degree to three, thus saving myself a core for running SQL Server and Windows.

The following two graphs shows the total runtime of 50 iterations for each different method, as well as the total runtime divided by number of rows. Runtime in seconds along the Y-axis, number of rows along the X-axis. It basically shows that all LINQ to SQL flavors suffer from initial setup, but they scale extremely well, ending up outperforming all other contestants by a fair margin. One could argue that it’s rarely relevant in cases of more than a thousand rows as we’ll rarely pull out that much data at once. Never the less, I find it interesting - it’s something I’ll have to look under the hood to find an explanation of. Ignoring some variance due to the low row number, DataReader, DataTable and my Enhanced Automapped DataReader functions outperform most contestants.

It seems the reason the LINQ flavors are so speedy is because their object mapper methods are being cached in the local thread cache. And since the CodeProfiler will execute all iterations on the same thread, each iteration (except the first) will simply reuse the mapper methods. See System.Data.Linq.SqlClient.ObjectReaderCompiler.Compile() for reference.

As Kris Vandermotten duly commented, I should have tested a compiled LINQ query as well as that really is a separate scenario. I’ve added a tenth method as well as a new line in the graphs. The compiled LINQ query, although requiring a bit more plumbing code, really blows the competition away. It’s fast for even single row queries since we no longer suffer from the compilation time. For larger rowsets the advantage diminishes as the saved compilation time is spread out over a large amount of rows.

As a friend of mine, Jakob Andersen points out, I really should be a bit more specific in regards to the purpose of these comparisons.

I am in no way trying to make the claim that it’s unreasonable that an OR/M framework hurts performance. Neither am I claiming that my comparisons between LINQ to SQL, Subsonic and nHibernate are fair. Really, to make a fair comparison, one should compare the very specific features of the frameworks, not a feature set as general as what I’m doing in these tests.

The thing is, some of these frameworks (nHibernate, I’m looking at you especially) just offer so much more functionality that it’s a burden they have to live with. While this extra functionality might cost a bit when we’re just trying to test the actual object translation performance, it might gain you a whole lot more in real life scenarios. Take for instance, if you utilize nHibernates caching, you might save the time that goes towards the database lookups - saving you much more than the actual translation process in most cases.

So, as mentioned in a couple of tests - take these results with a grain of salt. They’re rather out-of-the-box simple tests of direct querying & result translation performance. We’re ignoring all of the extra OR/M features that we have available, and we’re ignoring that these different frameworks offer very different functionality. 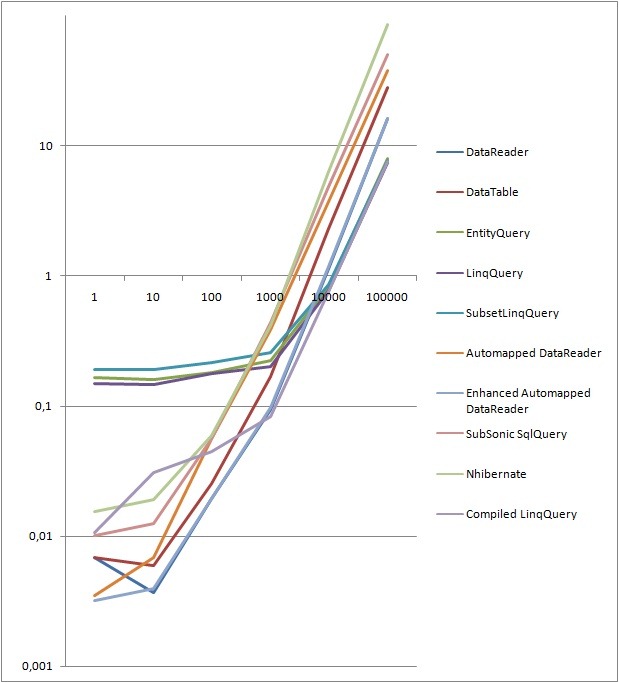 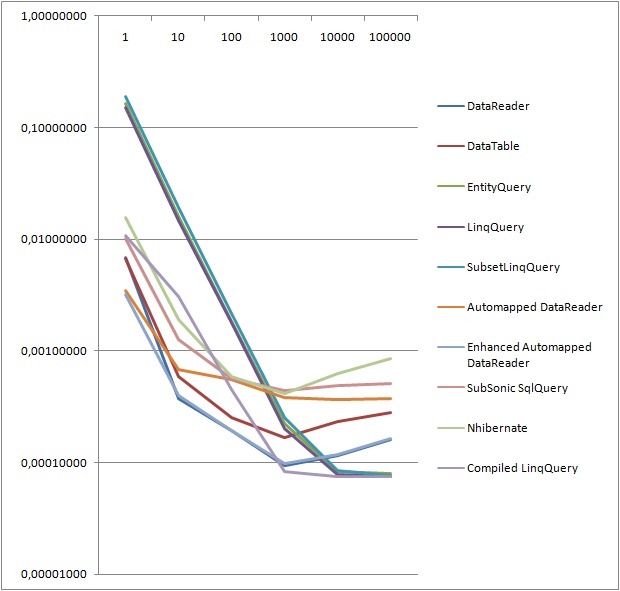 Remember, even though there seems to be somewhat of a speed difference, the fastest method takes only 0,000074 seconds, while the slowest takes 0,00085 seconds. No matter what, you should’nt consider refactoring your solutions in regards to performance unless you really have a high hit count, or unless it’s for valid architectural reasons. Otherwise you might just risk having Ted Dziuba shove his foot up your ass.