How To Do URL Rewriting on IIS 7 Properly

One of my earlier blog posts, and the all time most popular one, was about how to make URL rewriting on IIS 7 work like IIS 6. While my method did provide a means to the goal, it’s humiliatingly far from what I should’ve done. Since the old post is still the most visited post on my blog I feel obligated to write a followup on how to do proper url rewriting in IIS 7.

I’ve setup a simple web application solution structure like so: 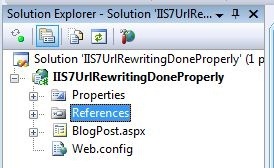 The easiest way of rewriting URL’s is to add a new Global.asax file to the root of your solution. Now paste in the following code:

Now all you need is a single change in your web.config file:

The web.config change basically does the same as adding the wildcard map in IIS6. It ensures ASP.NET will run our Application_BeginRequest function for all requests - both those that match .aspx files as well as those for static files.

If you added the Global.asax file from before, make sure you remove it again so it doesn’t conflict with the HttpModule we’re about to write. Add a new class project to the solution - I’ve called mine MyUrlRewriter. Add a reference to System.Web and add a single new class file to the project called UrlRewriter. Your solution should look like this: 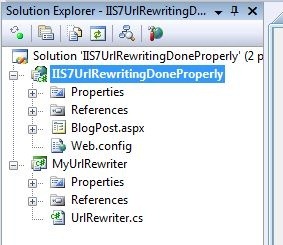 Now paste the following code into the UrlRewriter.cs class file:

Notice that the context_BeginRequest function is identical to the one we had in Global.asax, except we have to reference HttpContext.Current explicitly since it’s not implicitly available as in Global.asax.

Now add a reference from the original web application project to the MyUrlRewriter class project. Once this is done we just need to ensure our HttpModule is included in our web application by modifying the web.config:

At this point you should be able to run the website with the exact same URL rewriting functionality as we had before - though this time in a redistributable assembly called MyUrlRewriter.dll which can easily be included into any website by adding a single line to the section of the web.config file.

If you have basic requirements to your URL rewriting solution you may often be able to settle with one of the many readymade HttpModules that you can simply plug into your application. IIS 7 also has a URL Rewrite Module that you can install and easily configure through the IIS manager.