In this blog post I’ll give a quick introduction to what genetic algorithms are and what they can be used for. We’ll implement a genetic algorithm that attempts to guess an RGB color by evolving upon a random set of initial guesses, until it at some point evolves into the correct RGB value.

What are genetic algorithms?

There are many different ways of implementing genetic algorithms, and there are usually many variables to adjust in a genetic algorithm. How large should the initial population be? How many solutions survives each generation? How do the survivors reproduce? In reproduction, does each survivor give birth to a single child, or multiple? As is noticeable from the terminology, genetic algorithms closely simulate biology.

What we’re trying to accomplish with this demo implementation, is to guess a random RGB value. The RGB values are stored in what is basically a triple class. The only added functionality is an override of the ToString function to make it easier for us to print the solution candidates.

Next up, we have an interface that represents a basic chromosome. In this implementation, a chromosome is basically a candidate solution. The chromosome is also the type that implements the fitness function, to evaluate it’s own correctness. The fitness is returned as an arbitrary double value, the higher the value the better a candidate. The ChromosomeValue property is the actual value being tested - in this case, an instance of Rgb.

I’ve implemented the genetic algorithm using the template pattern for easy customization and implementation of the algorithm. The algorithm itself is an abstract generic class. This means we have to subtype it before we can use it, a requirement due to the abstract template based implementation.

There’s a number of properties that are rather self explanatory, given the commenting.

The constructor takes in two parameters, the size of the population at any given generation, as well as the number of survivors when an evolution is performed - and a new generation is created, based on the survivors of the old generation.

Lastly, we set the current generation as generation number 1, and then we call createInitialChromosomes to instantiate the initial generation 1 population.

There are three abstract methods that must be implemented by any subclass, CreateInitialRandomChromosome being one of them. I’ll go over the actual implementations later on.

Then we’ll select a random survivor based on an weighted average of their fitness. The randomly selected survivor will be mutated, and the result of the mutation is added to the new generation population. The Mutate function may return an arbitrary number of results, so technically a single survivor could be the parent of all children in the new generation.

Finally we set the current population and increment the generation number.

The actual implementation is a class inheriting from GeneticAlgorithm, specifying Rgb as the generic type we’ll be working with.

The constructor just calls the base class directly, specifying the population size to be 100, and that there should be 10 survivors of each generation.

The CreateInitialRandomChromosome method just returns a new Rgb instance with random R, G and B vlaues between 1 and 255.

I’ve implemented an optimization that makes sure the most fit candidate chromosome is always included in the survivors of each generation. This’ll make sure we’ll never have a new generation with a worse candidate solution that the last.

The final method to implement is the Mutate method. This is the one that’s responsible for mutating a survivor into a new candidate solution that’ll hopefully be better than the last. The implementation is really simple. We just make a new RgbChromosome and set it’s R, G and B values to the same value as the parent chromosome, added a random value between -5 and 5. The Math.Max and Math.Min juggling is to avoid negative and 255+ values.

The final class is the one implementing the IChromosome interface.

In this case I’ve hardcoded a target RGB value that we wish to guess. Note that this is only for demonstrations sake - usually in genetic algorithms we don’t know the “answer” and will therefor have to base the fitness function on a set of rules that evaluate the fitness of the candidate.

The fitness function calculates the total difference in RGB values and subtracts that from the maximum difference. As a result, we get a fitness value with lower values indicating a worse solution.

Here is the full IChromosome implementation:

Running the algorithm is as simple as instantiating a new RgbGuesser and then calling PerformEvolution on it repeatedly. Note that there’s no built in stop criteria in the algorithm, so it’ll continue to evolve the candidates even though a perfect candidate may already have been evolved. This I’ve introduced a simple check to see whether a perfect candidate exists:

The full code can be seen below:

Running the application should eventually result in a perfect candidate being found. If you’re lucky, you’ll find it at generation 42 :) 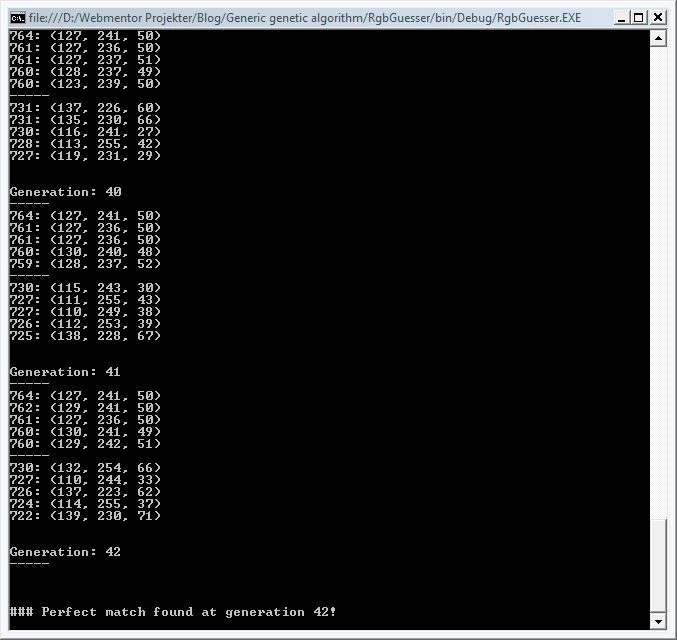 There are different ways of guessing an RGB value. We could just randomly guess until we hit the correct one - with a probability of 1/(255^3).

We could also iterate over all 255^3 solutions, eventually hitting one. Provided the target is completely random, we should hit it after 50% of the solutions have been tested - that is, after just about 8 million tests.

Another more clever approach, given the fitness function would be to just increment each RGB value once and fine the point at which an increment results in a lower score - then we’ve solved one of the RGB values. Using this approach, we can solve the problem in just 255*3 number of tries at most. But really, that’s no fun!

Based on a quick series of tests, 50 seems to be the average max generation we’ll have to hit before we’ve guess the correct RGB value. That’s 50 generations of 100 candidates, for a total candidate count of 5000 - somewhat less than the random guessing and iterative solutions. To conclude - in this case, a genetic algorithm is far from the optimal solution, but it’s an interesting way of approaching hard-to-define problems that may not have a single optimal solution that can be calculated within a certain time restraint. In those cases genetic algorithms can be a great way of approximating a close-to-perfect solution.

Based on some of the comments I’ve received, I’ve posted an update to the genetic algorithm to make it more “genetic”.