After eating breakfast I still had one and a half hours of time to kill… So I found myself a free CardPlayer magazine and sat down at a slot machine. One of the female attendants came over jokingly asking me why I’d just sit there playing the slots while reading the magazine, I didn’t really look like the typical slot player, hardly interested in the slot machine itself. I ran good, really good. When I went back to play I’d built up a surplus of $800 on the slot machine, not bad!

The tournament itself was yet another disappointment. I finally today realized how awfully bad the structure is. I ran card dead for the first hour, and at that point I only had around $800 back, 20 BBs. These tournaments start with $1500 stacks, 25/25 blinds that rise every hour (about 25 hands/hour). It is simply a disgrace to call these events for WSOP events, and even more of a disgrace that there are bracelets for the winner of these events, since there’s rarely more than 350-400 participants.

A couple of pictures showing the final four tables of the WSOP ME: 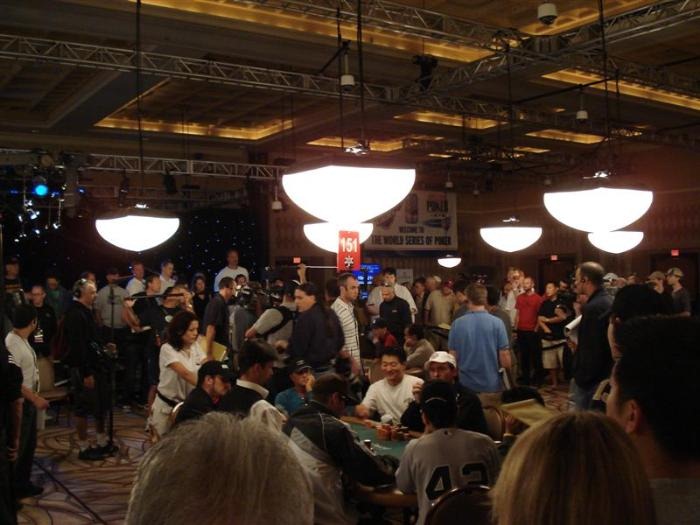 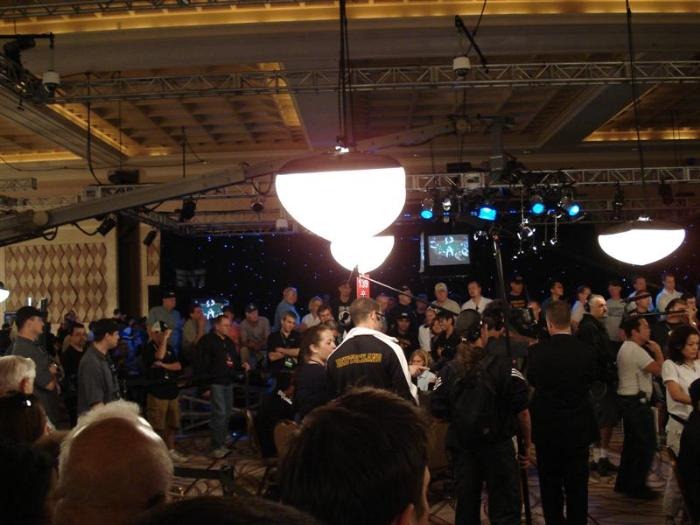 Later in the day I went to the Mirage with a couple of the others to play some $2/5 NL. Mirage had a nice room, although I don’t really like their cards (KEM) when compared to the WSOP Copag cards. Also their brush was working a manual list that wasn’t visible to players. To sum up the play, I ended down around $900, most of it due to the last pot I played. Me and Joachim had just agreed that this would be our last hand before we’d go (I was UTG, just before the BB). So I look down, and what do I see? Black kings! I raise it up to $20. I get a single caller in MP from an extremely tight player - really, really tight. The flop comes 646r. I bet out 3/4 pot, he calls. At this point I really only fear hands like 44, 66 and pairs 77-AA. 66 is unlikely though, so is QQ-AA as he’d have reraised me preflop with those holdings. Turn is another 6 which counterfeits his 44 full house in case he has that one. I bet 3/4 pot, he calls. River is a jack, a pretty blank card unless he has JJ, I’m pretty sure he’d have raised me earlier with JJ though. I bet out 1/2 pot, and he immediatly goes all in. I have to call as the pot is now very big. He turns up A6o for the turned quads, and he rakes in the almost $1k pot. I have no idea how these awfully tight players suddenly wake up, calling a $20 UTG raise with utter crap.

Later on we went to the Venetian to play some $1/2 donk NL. Venetian has a spectacular room! Great scenery, great tables (although I don’t like their felt as much as the Rios) and above average cocktail services. Also this was the juiciest $1/2 table I have ever seen, it is unbelievable, I can’t even describe it. Just imagine people calling down with ace high all the time, that about sums it up. I ended up $32 after about 5 hours play due to me donking it up with the other sjufts at the table.