I often do code profiling, usually involving a stopwatch and some boilerplate code. I decided to make a quick’n’simple class that’ll help me get rid of some of that code and concentrate on the actual code being profiled.

There are just four functions in the class, all overload variations. In a nutshell, they’ll allow you to profile a single action with & without warmup, multiple iterations and multiple iterations run i parallel. The code is more or less self explanable so I’ll just throw it out there:

Using the CodeProfiler class, it’s easy for us to do code profiling, including measuring the effects of parallelization. Here’s an example of calculating the square root of the numbers 1 through 10 million 100 times, using 1-16 simultaneous threads. FYI I’m runing on a quad core machine.

And the result as expected, the performance panning out when threads >= cores. Using more threads than there is cores will usually not result in added performance, just increased context switching which is not desirable. Here’s the resulting execution times with seconds on the Y axis and number of threads on the X axis. 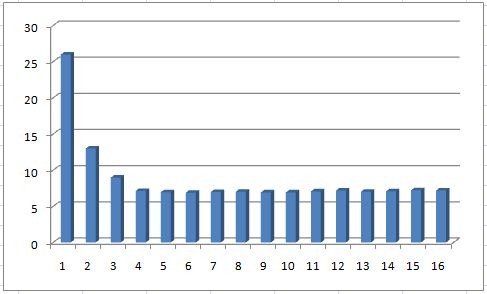 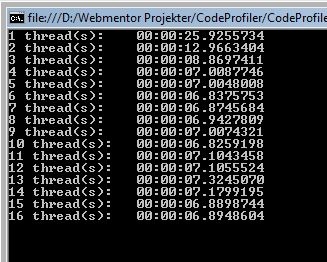