Since I originally posted my XmlOutput class I’ve received lots of great feedback. I’m happy that many of you have found it useful.

I have been using the class myself for most of my xml writing requirements lately (in appropriate scenarios) and I’ve ended up augmenting it a little bit. Nothing major, just a couple of helpful changes.

Instead of manually declaring our xml declaration each time:

XmlOutput will instead add an XmlDeclaration with the default parameters:

Note that this is a breaking change, meaning it will result in different output than the earlier version did. While you could make an XmlDocument without an XmlDeclaration earlier, you can no longer do this.

XmlOutput will throw an InvalidOperationException in case an XmlDeclaration has already been added to the document. I do not allow for overwriting the existing XmlDeclaration as XmlOutput really is forward-only writing and since it might often be a flaw that the XmlDeclaration is overwritten.

Just as I used IDisposable to easily write indented text, I’ve done the same to XmlOutput. For smaller bits of xml, it might cause more bloat than good - but it’s optional when to use it. Using IDisposable will simply call EndWithin() in the Dispose method, making indented xml generation more readable.

Instead of explicitly requiring input values of type string, both InnerText and Attribute will now accept objects for the text values. This allows you to easily pass in integers, StringBuilders and so forth.

Another breaking change - ToString will now return the OuterXml value of the XmlOutput object.

Making it easy to do it right

Jakob Andersen made a great post regarding how we might extend XmlOutput to return different kinds of interfaces after different operations. This would allow us to utilize IntelliSense as that’d only show the methods that were possible at the current state.

I started implementing it, but I kept running into walls after having thought it through. Let me start out by representing a state machine displaying the different interfaces involved: 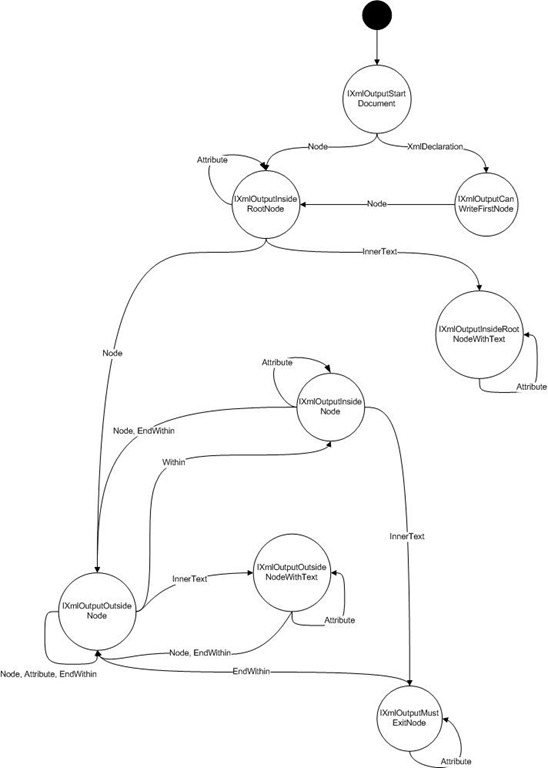 So basically, calling a Create method will return an IXmlOutputStartDocument which only supports creating a Node and creating an XmlDeclaration. If you create an XmlDeclaration, you’ll get an IXmlOutputCanWriteFirstNode which only allows you to create a node as that’s the only valid option (ignoring read-only operations). Continuing on, creating a Node at that point will return you an IXmlOutputInsideRootNode which again supports creating either sibling nodes, attributes or innertext. If you call InnerText at this point, we get to a blind alley at the IXmlOutputInsideRootNodeWithText which only allows creating attributes.

Now, on paper, this seems great. The problem however becomes apparent when we start using it:

One way to get around this is to create a new variable after each operation, but I don’t really think I’ll have to explain why this is a bad idea:

Another issue is that we’ll need to have the types change based on the stack level. Imagine we create an IXmlOutputOutsideNode like this:

This will result in us having create a single node inside the root node. We are still within the root node scope (creating another Node will also be a child of the rootnode, but a sibling of the just created node). The problem is, at this point we’re able to call EndWithin() since the IXmlOutputOutsideNode interface allows it, but we can’t move out of the root node scope as we’re on the bottom of the stack. Unless we create interfaces like IXmlOutputOutsideNodeLevel1, Level2, LevelX interfaces, we can’t really support allowing and disallowing EndWithin depending on stack level - and this is a mess I don’t want to get into.

So what’s the conclusion? While the interface based help in regards to fluent interfaces is a great idea, it’s not really easy to implement, as least not as long as we need some kind of recursive functionality on our interfaces. If we had a simple linear fluent interface, it might be easier for us to support it, though we will still have the variable issue.